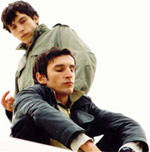 Danijel Hocevar, Managing Director and Producer of VERTIGO FILM, was selected among VARIETY’s ten producers to watch in 2001.