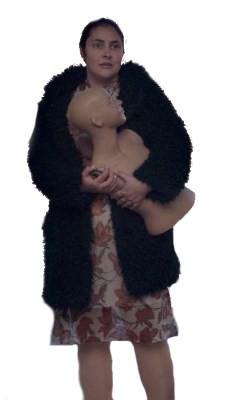 God exists, her Name is Petrunija

The film is based on true events that took place in Macedonia few years ago.

In the month of January during Vodici, a Christian holiday, a unique ceremony takes place all around Macedonia, the waters of the lake are being baptized by the high priest by throwing a cross into the water, but the real attraction is people jumping into the cold waters of the lake trying to find the cross! The one who finds it is believed to be blessed for the whole of next year and becomes a kind of local hero. This event is accompanied by 30 to 40,000 guests every year. Few years ago a woman jumped in the icy water of the local river and caught the cross. That was a first in the history of the ceremony, the local priests didn’t know what to do while the locals complained of the breach of regulations. A woman was not supposed to jump or even worse catch the cross, the town was on their feet. Subsequently the cross was taken from her and since that year women are officially banned from the event.

The event inspired a rage within me, especially after the decision of the church to ban women from the event from that moment on.

We live in turbulent times but it seems to me that the question of being a woman is more threatened than ever before. We often speak of the woman and Islam, me I would like to push the question further: religion and woman and the place of the woman within. Where are we going and what kind of world we leave for the woman of tomorrow?

I put forward the notion of the sex of God, and the importance of the factor of the sex of one as pivotal factor in our society. By challenging the idea of the actual sex of the supreme creator I want to put forward the idea of rebellion and the importance to rebel in order to change. Through this simple concept I reinforce my firm believe in the power of the individual. Especially in a society like Macedonia where current policies of equality between the sexes have not fully taken shape.

Petrunija is solid, she is strong and determined, but also beautiful and sexual and while she is terrorized by men the entire day, she manages to stay calm and in control, her goal is clear and simple- she fights to exist in the terms she believes in: FREE and she is prepared to succumb under most difficult and agonizing difficulties to reach it.

PETRUNIJA IS LIKE A MARY MAGDALENE AS SHE GOES THROUGH HER ORDEALS, THE FILM BECOMES A SORT OF A FABLE, OR A CONTEMPORARY DANSE ON THE CONTEMPORARY WOMAN OF TODAY.

Recently a Macedonian film journalist published a book where he speaks of Macedonian cinema. In his book there is no mention of presence of females in the cinema of Macedonia. So not much has changed in my part of the world, so God is a woman and why not?! And how would our world be if the world was run by women. This is the question I pose to my self?